I’ve been a huge fan of Walt Disney’s tenacity ever since I first learned his story. Of all his marvelous quotes about creativity and creative work, this one is my favorite. May you sleep to dream.

For all those who create and face criticism for putting the very best of your imagination out into the world, remember this👇

“In many ways, the work of a critic is easy. We risk very little, yet enjoy a position over those who offer up their work and themselves to our judgment. We thrive on negative criticism, which is fun to write and to read. But the bitter truth we critics must face is that, in the grand scheme of things, the average piece of junk is probably more meaningful than our criticism designating it so. But there are times when a critic truly risks something, and that is in the discovery and defense of the new. The world is often unkind to new talent, new creations. The new needs friends.”

This week I have my first literary agent pitch meetings. I directly worked with a publisher for my first book so this is the first time I’m meeting agents and pitching myself and my writing to them.

I wanted some advice on this process and came across the Netflix series Shine On hosted by Reese Witherspoon. In one episode, Reese interviews Ava DuVernay and they talk about this exact kind of high-stakes personal pitch scenario in creative fields.

Ava’s advice:
“They want to hear you be the one [they’re looking for]. They don’t want to hear that you’re nervous. They want someone who’s smart, and capable, and passionate, and going to try. And those are all the things you already have.”

What does Reese Witherspoon think when she auditions? “I think in my mind, “Give me the ball.” Because people just want to know you’re going to handle it.”

Their bottom line is that even if you don’t know what you’re doing, be committed to figuring it out.

So today as I prepare my materials and refine my pitch, I’m holding this advice in my mind and heart. I’ve already got what I need. Now it’s just a matter of walking into the room like I already belong and letting myself shine.

I’ve decided to participate in National Novel Writing Month again this year, writing 50,000 words in 30 days. I have a few new book projects I’m thinking about in different genres and I’m trying to decide which to work on in November. Would love to know your opinion! Choices:

Also, are you participating in NaNoWriMo this year? What are you planning to work on?

Sharing some wonderful news today: I’ve been asked to direct a play at the 2020 Edinburgh Festival Fringe and accepted. More details soon. For now I’m just filled with excitement to take part in Scotland‘s legendary theater festival that I’ve dreamed of going to for years! https://www.edfringe.com/

This morning I realized that I’m going to have to start over. Or rather, my second novel has to be tossed and I have to begin again. I’ve been trying to patch together the pieces for months. Maybe some of them will prove useful down the line. Maybe some of them can be recycled and reused and reformed. But now what I need to do is begin again, all over again. For a split second, the weight of despair was heavy. Months of work just evaporated. And then very quickly, my heart moved from mourning to excitement. A fresh start, a new beginning created by a new ending. This is the creative process. It takes time. It takes patience. You have to be willing to go back to the beginning, reset, and try again. That’s where I am today: at the edge of the cliff, and now I leap.

Dear ones, on freeeeezing days like today (windchill in NYC was 4 degrees this morning!) I make some hot beverages, hunker down at home, and engage in creative work as I dream of spring. How do you endure? (H/t Honschar for his inspiring street art.)

When people ask me if I have a writing partner, I say yes. And its name is sleep. They laugh even though I’m very serious.

When writing books, you must plant seeds early in the story that won’t take root until much later. Like a thoroughly knotted necklace chain, these seeds and how they come to life can be incredibly gnarly problems to untangle. Some seem completely impossible.

Whenever I hit a snag, I try to write my way through it or I make lists of solutions. Most of the time neither of these two actions work.

Then I’ll try research. That doesn’t usually provide a solution to my plot challenge at-hand either though it often leads me to interesting discoveries that I use elsewhere in the book.

You know what really helps? Going to sleep and not thinking about the problem. I go to sleep imagining myself in one of three scenarios: diving off a cliff in the Grand Canyon and flying instead of falling, swimming up to a whale in the deep sea (for years this whale has shown up in my dreams whenever I’m feeling particularly in need of comfort), or scuba diving through a kelp forest meeting all kinds of friendly sea creatures.

This happened to me last night (and it was the kelp forest for the win!) I’ve had a looming problem in my second Emerson Page book that I just couldn’t solve. It’s actually THE looming problem: the explanation of the key action that drives Emerson’s entire journey in the second book which leads to the basis for the third, and final, book in the series. It’s been a frustrating problem to solve because none of the resolutions I wrote felt right nor good enough because honestly, they were all terrible.

I woke up much too early this morning. Looking at the ceiling, there was the answer seated comfortably in my mind as if it had been there the whole time just waiting for me to see it. It was so much simpler than I realized. I wrote it down in three short paragraphs in the early light of morning just now.

The relief I feel this morning is immense, like dropping a heavy weight that’s been on my shoulders for years. It’s like solving a terrible problem in a relationship that’s prevented the relationship from moving forward. Finally lifted when I least expected it, I can just get back to the joy of living in this world I made and writing my way through it. 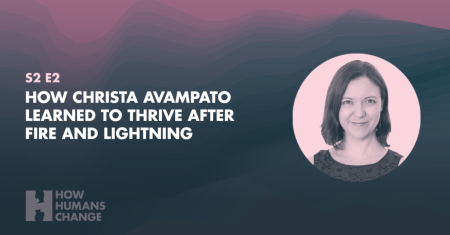 If you want to really know me, listen to this interview. The big question for me in this lifetime is, “Does everything matter or does nothing matter?” A few months ago, I gave the most personal interview I’ve ever done. My friend, mentor, and storytelling hero, John Bucher, introduced me to Josh Chambers and Leiv Parton, hosts and producer of the podcast, How Humans Change. My interview is now live. our wide-ranging conversation includes career, science, sustainability, the health of the planet, biomimicry, dinosaurs, product development, therapy, curiosity, change, the economy and capitalism, time, technology, work, culture, implicit bias, life-changing moments, storytelling, writing, poverty, trauma, writing, my book, mental health, strength, resilience, therapy, fear, courage, my apartment building fire, how my plane got struck by lightning, and so much more. Despite these dark topics, there is a lot of light, fun, laughter, and healing in this interview. It’s the most personal interview I’ve ever given, and some of the details I reveal about my personal path and past I have never discussed publicly before now. I hope you enjoy the podcast episode and that it inspires you to live the best life you can imagine.

My friend, Dan, recently asked me if I would bring back my monthly newsletter because his social media feeds are overwhelmed. And because I love Dan and because I have a lot of fun creative projects happening, I’m doing it! It’ll be filled with my fun shenanigans like my storytelling shows, my book and journalism work, my travels, podcast interviews I do, various creative projects like my museum work, and plenty of inspiration and resources to help you with your creative work! If you’d like to sign up, just like this post or drop me a line at christa.avampato@gmail.com. The newsletter will only be once a month (at about the 1st of the month) and this list will never be used for any other purposes so no spam worries.