This tag is associated with 2 posts 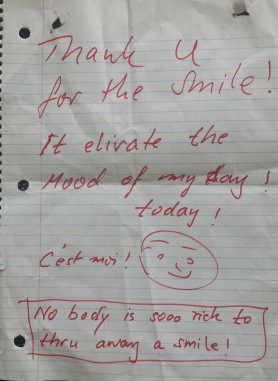 When I was a kid, I used to watch the show Touched by Angel with my mom. Since then, I’ve always felt that angels walk among us. And on my moving day, I came face-to-face with one of them.

I was stressed on my moving day, and I left the house to take Phin on his morning walk. There was a Scooby-Doo like blue van parked right outside the house exactly in the place that I had hoped my moving van could park in a few hours provided no one else had taken it.

I’d never seen the van before. A man who looked like Santa Claus, long white beard and all, was in the driver’s seat. The van was stuffed with all kinds of items from what I could see, and I assumed that the man was living in his van. I didn’t recognize him but I felt like I knew him. I smiled and waved, and he smiled back. When I returned with Phin, he was still there and again I smiled and waved.

Right around noon, the blue van pulled away and my moving van pulled right up to take the space. When I went out to greet the movers, I found the note pictured here stapled to the tree outside. Angels are all around us, especially when we need them most. Just when you think you’re down and out, all of a sudden you find support in the most unlikely places.

10 years ago, I interviewed at a large retail company for a summer internship while I was an MBA student at Darden. It was my top pick for an internship and I was proceeding well in the process. The final step was a psychological evaluation that was supposed to be a formality. Instead, the psychologist dug into my family history for over an hour. She asked me a lot of very painful questions and was very judgmental about my childhood. I stood my ground, told the truth, didn’t crack, and stated how I did the best I could in the circumstances I was born into. I didn’t get the internship, and I was heartbroken. I thought the story was over, but it wasn’t.

A few months ago I received a letter from a law firm. A class action lawsuit was filed against this retail company for discriminatory hiring practices. The HR records had been subpoenaed and unsealed, and it was deemed that I may be due a payment for damages. I confirmed that I interviewed with the company during the time period in question, sent the letter back, and never gave it another thought.

When I arrived home yesterday, I had a letter from the law firm.The retailer confessed to its discriminatory practices, and settled out of court. The letter contained a check for damages. Not a huge check, but one that I can put to good use. I was shocked. I’m still shocked. I actually cried a little. And then I cried a lot. Not out of sadness, but out of relief.

I didn’t realize how badly I’d felt about this incident all these years. When you grow up without enough, you think you aren’t enough. It is a painful fact of growing up poor. And as much as I have grown into a strong, resilient, and confident woman, there is a small part of me who still carries around this slightest feeling of shame. I’ve learned to use it to go further, try harder, and reach higher.

That incident 10 years ago with the retailer brought all of those feelings into clear focus. I wasn’t mad that I didn’t get that internship. I was ashamed and deeply embarrassed because I knew that my family history made them turn me down. I was told I wasn’t good enough because I hadn’t grown up with enough. How hard I had worked for so many years to lift myself up didn’t matter to this company. And in fact it was a black mark against me.

So getting that check yesterday was a nice thing financially, but that is such a small benefit compared to what it means to me on a much more profound level. That is karma. That is the universe righting a wrong. That is the reward of standing tall, and not letting small-minded people get you down. That is proof to me that our authenticity, work ethic, and determination to making meaning of our past does get rewarded. It can take time. It can often take too much time. But it happens. It happens.