I’ve been working on my first multi-panel collage. I wanted the subject to be fitting for a larger piece.

I give you Dreadnoughtus. Discovered by Dr. Kenneth Lacovara and his team in Argentina, it is one of the largest animals to ever roam the planet. It is part of a large group of plant-eating dinosaurs known as titanosaurs.

I recently learned that dinosaurs skeletons are never found in totality and many times are reconstructed from a small handful of bones. The skeleton of Dreadnoughtus was exceptionally complete with over 70 percent of its bones represented. In life, it was 85 feet long and weighed approximately 65 tons.

Dreadnoughtus is entirely composed of the faces of other animals closely related to dinosaurs—birds (which are in actuality dinosaurs) and modern-day reptiles. The skeleton in silver paint illustrates the bones that were part of the discovery in Argentina per this schematic: 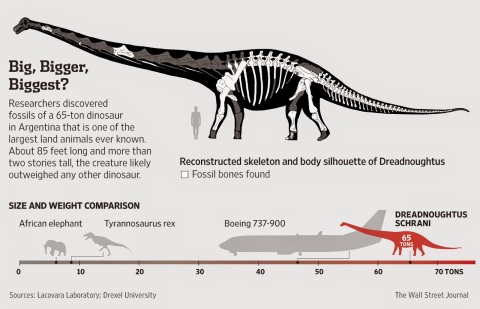 The salmon-colored sky represents the asteroid (comet) which likely caused the end of the 165-million year reign of the dinosaurs. There is still some mystery surrounding the exact cause though it is widely believed that the Chicxulub crater on the Yucatan Peninsula in Mexico suggests that an asteroid or comet approximately 10km wide hit the Earth, and created a series of events that led to their extinction.

Below Dreadnoughtus, I used bits of paper from a photo of the gnarled landscape of Wistman’s Wood. Packed with moss-draped boulders, ferns, grass, and lichen-covered dwarf oaks, and dense fog, it’s located in Dartmoor National Park in the U.K. It’s a landscape that inspires myth and mystery, the kind of wonder that dinosaurs inspire in so many of us.

The other items in the collage represent everything that was born into the world because of the exit of the dinosaurs. The truth is that if the dinosaurs hadn’t died out, if the asteroid or comet hadn’t hit the Earth exactly when and where it did, we likely wouldn’t be here, nor would many of the other species that exist today. Nature is opportunistic and chancy, one species loss is another’s gain. Everyone and everything we know and love came about on the backs of the dinosaurs. Our history is intricately intertwined with theirs. We owe them a great deal, as Ken explains in his book, Why Dinosaurs Matter.